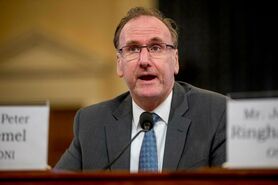 Mr. Kiemel is currently the Counselor to the National Intelligence Council at the Office of the Director of National Intelligence, where he oversees tradecraft and serves as the final reviewer for a wide range of issues. Mr. Kiemel started his career in the CIA, holding a variety of positions including the CIA’s Eurasia Issue Manager, the NIC’s Deputy National Intelligence Officer for Eurasia, and CIA’s Deputy Issue Manager for Eurasia and Regional Dynamics. Prior to his current position, he served as the Deputy Assistant Director of the CIA for the Iran Mission Center. Mr. Kiemel recently testified in front of the House Intelligence Committee talking about the national security implications of climate change.
Powered by